I was lucky three times.  First, a colleague from my former career, who is now also a reference and instruction librarian, told me in a Facebook message, “Ray, you must go to LOEX!” Thank you Meridith! Second, several of the librarians I work with were planning to carpool to LOEX2016 in Pittsburgh, and I got plugged into their network.  Third, they convinced me to apply for conference/travel funding, even though I was/am only part-time.  And I got funding! Here is a photo of the AU delegation: 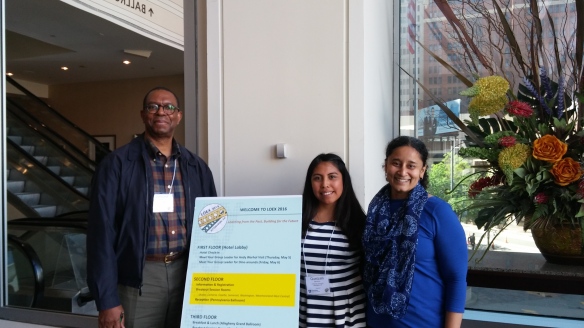 We arrived in time for the Thursday First-Time Attendee Orientation.  Brad Sietz, LOEX director, gave a talk that was simultaneously the history of LOEX, the history of library instruction, and the latest in current trends and developments in librarianship. It was a warm and enthusiastic crowd. I tweeted:

Thursday night I joined a group for dinner at the Original Oyster House in Market Square.

Friday opened with breakfast and the keynote address by Dr. Sheila Corrall from Pitt.  Lots of material and lots of references but she kept my interest.  Her comments on “reflective practices” and “blended librarianship” in library instruction really caught my ear. Will be reviewing her slides as soon as they are posted.

The sessions I attended Friday were all interesting and informative.  Lots of tweets, lots of good sources.  So cool to finally meet face-to-face with people I’ve only “known” through twitter chats, esp. the #critlib folks.  Speaking of #critlib, a colleague mentioned that LOEX is the whitest library conference she’s attended.  If true, I don’t think that is the fault of the LOEX conference folks: applications to attend are not racially screened.  So are librarians of color self-selecting out by not applying?  Perhaps an economic decision gets made to go to ALA or another of the big conferences, and no funding is left?  Maybe library instruction is considered less important ( I am still amazed that Information Literacy and Instructional Design was just an elective at my LIS program, and offered only once a year, but glad I took it as an elective).  Should it even be interesting that a largely white profession (librarianship) has even whiter sub-professions (library instruction) offering essential skills and competencies for success in the overall profession?

Also, speaking of #critlib, shouldn’t information literacy/library instruction/instructional design occupy a more prominent place in critical librarianship discussions?  I would think that the way we teach, and the extent to which our teaching is successful/effective is a very significant part of our identity as information professionals.

Favorite sessions. A toss-up between Rhetorical Reinventions, Everything We Do is Pedagogy, and Concept Inventories: Teaching IL Like a Physicist. (Hyperlinks to follow, I promise!)

OK.  Friday night dine around was so much fun.  I got on the list for Nicky’s Thai Kitchen with the #critlib folks.  Seating was tight but the food was delicious! Here is a pic from a tweet:

Saturday morning we had pancakes for breakfast.  And the lightning round of presentations has some fascinating ideas (even though my own didn’t make the cut). Favorite lightning round talk: The Human Library (gotta get one at my institution!). We skipped the afternoon sessions and got an early start on the road back to DC.

Hoping soon to pull together the live tweets (Kelly has a good one here, and there may be interest in building a bibliography of greatest hit sources from the excellent presentations.

#critlib chats are always so rich with resources.  Today’s was no exception. Below are some of the links, books. slideshows, etc. mentioned in tweets for future reference. (I have been wanting to do this for a long time!).

This list is by no means exhaustive. I just ran out of gas (and the basketball game came on. Go Heels!)

Informed Agitation: Library and Information Skills in Social Justice Movements and Beyond.  Morrone, ed.  Z716.4 .I55 2014

Doherty, J. (2007). No Shhing: Giving Voice to the Silenced: An Essay in Support of Critical Information Literacy. Library Philosophy and Practice (e-Journal).

Gotta get these live chats on the calendar so I plan for them, instead of stumbling upon and lurking after the fact, so to speak.

Tuesday’s #critlib chat led me to #CLAPS2016 and David Hudson’s keynote, just as the last #radlibchat led me to Spencer Lilley’s keynote address from Vancouver, which in turn led me to a wide range of background reading at my library, as I suspect the Hudson talk will as I pour through tonight’s tweets.

There is a lot to be said about either, or both. The “critical” path takes me back to critical theory itself, its limitations, and discussions about the need to push original critical theory beyond its “native” boundaries to address current and present concepts and manifestations of power and domination, up to and including LIS discussions of diversity and inclusion.

Before things get too serious, let me share with you all a photograph of my garden plot:

It’s tiny compared to the plots I had last spring in Cullowhee, and I only get the front half of the box. But I have grandiose plans to fill my half box with compost and rock dust, and after the final frost (a lesson I learned from last year’s experience of planting too soon), to plant a row of beets, a row of turnips, a row of okra, and a dandelion perimeter.

Back to the subject.

Again, the chat from two weeks ago drew me to a careful reading of Reiland Rabaka and his coverage of Amilcar Cabral (and of Franz Fanon, but that will be the subject of a subsequent post), one of my favorite thinkers. Cabral’s development of Africana critical theory (as described by Rabaka, particularly in Concepts of Cabralism) is itself a critique of and an evolutionary advance of critical theory, raising it (critical theory) from a Eurocentric philosophical construct with Marxian roots to a trans-disciplinary human science level that we, as librarians, can deeply appreciate and even relate to (at its foundation, library science is a social and hence, a human science, isn’t it?).

That was more than a mouthful.

Tonight’s #critlib live chat, similarly, along with the diversity and inclusion aspects of Hudson’s keynote, drew me back to Amilcar Cabral, especially his speech, National Liberation And Culture, delivered at Syracuse University on February 20, 1970, where he addressed issues of colonial cultural domination and power.  He wrote,

“Culture, the fruit of history, reflects at every moment the material and spiritual reality of society, of man-the-individual and of man-the-social-being, faced with conflicts which set him against nature and the exigencies of common life.  From this we see that all culture is composed of essential and secondary elements , of strengths and weaknesses, of virtues and failings, of positive and negative aspects, of factors of progress and factors of stagnation or regression.  From this we can also see that culture – the creation of society and the synthesis of the balances and the solutions which society engenders to resolve the conflicts which characterize each phase of its history – is a social reality, independent of the will of men, the color of their skin, or the shape of their eyes.”

Hudson alluded in his keynote remarks to the tendency of diversity and inclusion work to result in increases to neither diversity nor inclusion in the library profession.  Perhaps it is sufficient that awareness is raised and transmitted.  The presence or absence of non-white librarians, to paraphrase Cabral above, is a culturally derived social reality.  Having members of the profession flail themselves at conferences may or may not change the numbers. Raising awareness may be a temporary phenomenon, or may have a lasting effect.  Chatting about it on twitter and/or posting about it in blogs, similarly, may make a short-term or a longer-term  difference.

For critical social theory (including #critped and #critlib) to be effective in the 21st century, it has to become trans-disciplinary.  It has to cut across previously siloed disciplines of history, philosophy, sociology, political science, economic, post-colonial studies, gender studies, queer or LGBT studies, racial and ethnic studies, and cultural studies.  It has to reflect the material and spiritual reality of society, in both a descriptive and a normative way (I was so thrilled to hear Hudson mention his participation in a poetry slam!). Finally, and maybe most importantly, critical social theory that underpins both #critped and #critlib must marry theory to practice and to praxis in a harmonious, mutually reinforcing way.

© Raymond Maxwell and raymmax.wordpress.com, 2013-2023. Unauthorized use and/or duplication of this material without express and written permission from this site’s author and/or owner is strictly prohibited. Excerpts and links may be used, provided that full and clear credit is given to Raymond Maxwell and raymmax.wordpress.com with appropriate and specific direction to the original content.

The Library is Open...

A place to explore new ideas in Learning

poems and ruminations written in homespun plain language that everybody can understand.