My name is Raymond Maxwell and I am a reference and instruction librarian at Hunter Library. Now if I were a military strategist, I would speak to you in terms of how to strategically deploy troops and military assets, prosecute battles, control large swaths of land, and/or at a minimum, win over the hearts and minds of populations. If I were a politician, I might dazzle you with graphic details of power distributions and redistributions.  But I am just a librarian and we will spend just a few moments discussing the term “Information Asymmetry” and how it can relate to interactions between states, especially those in conflict.  Then, in the remaining time, we can take a quick look at “final status” issues and how their resolution might be shaped and informed by information symmetries.

So here is the definition:

Asymmetric information is a situation in which one party in a transaction has more or superior information compared to another.  This often happens in transactions where the seller knows more than the buyer, although the reverse can happen as well.  Potentially, this could be a harmful situation because one party can take advantage of the other party’s lack of knowledge.

So, how, you may ask, does that relate to conflict between states? It is a business definition, after all, about buyers and sellers that has little to do with international conflict.  But it does.

Perhaps a conflict between a state and a potential state might appear a bit lop-sided from a traditional logistics point of view or from a military strategy point of view. Either way the relations between the two groups, any two groups, and any number of groups, can be described as an aggregate of regular transactions, whether financial, political, economic, diplomatic, or whatever shape those regular transactions take. Disaggregated, those transactions, of buying and selling and trading, appear on the ledger sheet as everyday business.  But in the aggregate and across national boundaries, those transactions combine to form a matrix of relationships, whether between state or non-state actors, yet they still retain their dependence on information symmetry, or asymmetry across all parties to the transaction.

The most immediate example that comes to mind of asymmetric information analysis in a multi-state negotiation is the current round of Iran nuclear talks.  The whole of the matter is that other countries want to know about Iran’s nuclear progress and up until now, Iran has withheld that information from other states.  Of course, Iran is a signatory to the Nuclear Non-Proliferation Treaty (the only states that have never been signatories are India, Pakistan, and Israel), so disclosure is a treaty-bound obligation.  A clear case of an information asymmetry.

As another example, Israel collects customs duties on manufactured goods shipped out of Palestinian territories and normally pays that revenue back to the Palestinian Authority which depends on it to pay salaries of Palestinian civil servants.  But sometimes the Israelis withhold payments, and salaries cannot be paid. Recently, when the Palestinians served notice that they would seek membership in the International Criminal Court, of which Israel is not a signatory, Israel decided to withhold that payment to which the Palestinians were legally and technically entitled.  It was observed by a pundit that had Palestinians known their announcement would result in the loss of those revenue funds, they might have reconsidered.  For better or worse, a case of information asymmetry.

Both sides may be both buyers and sellers, though the products may be of varying format. For example, Israel may want to buy peace and security, while the Palestinians may sell a promise to control terrorists in exchange for that same peace and security. Or vice versa, i.e. the Palestinians may want to buy peace and security while the Israeli government may sell them a promise for protection from settler violence and/or military abuse at checkpoints. Either way, the relationship, whether between states and states, or between states and quasi states, or between states and non-state actors, or any combination or permutation thereof, can be characterized as a series of transactions, aggregated, and all informed at the decision-making level by information about the parties to the transaction.

That brings us to the second part of the definition:

But how can we relate either of these problems to the numerous transactions we discussed earlier that occur on a regular and repetitive basis?  We cannot, unless we relax our assumptions and think on a different level.

There are two pivotal and foundational transactions from which we can examine adverse selection and moral hazard.  They are:

Since it is action completed in the past, we can only apply moral hazard analysis to the 1947 resolution event. We can speculate what may have been the motives of parties on either side before the transaction or in the run up to the transaction’s consummation that may have resulted in adverse selection behavior. But again, it will only be speculation and hence, not actionable.

But since it will happen in the future, we can apply adverse selection and moral hazard analysis to the possibility of a transaction resulting in a Palestinian state. We can identify all parties to the prospective transaction, locally and globally. Then we can measure which parties have access to what information. And we can predict what behavior might result from adverse selection and what may be the after-the-transaction effects from moral hazard.  First, however, let’s take a look at a few historical maps to survey the information environment. 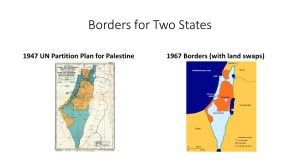 These maps yield very useful information.  Unfortunately, or perhaps not, the last two maps do not leave much to the imagination in terms of an eventual two-state solution. It is important to mention here that when American officials talk about the necessity of a two-state solution with 1967 borders and land swaps, there is both an assumption that there will actually be a viable state for the Palestinians so that Israel can maintain its Jewish and democratic identity, and an acknowledgement of the un-implemented features of the original 1947 UN Partition Plan that resulted in the creation of the State of Israel.

For better or worse, short of a withdrawal from the West Bank settlements a la a Sharon-led withdrawal from Gaza, there is in effect no land left for a Palestinian State. The number of Palestinians refugees, counting the 800,000 from the 1948 war and the 300,000 from the 1967 war, have now increased to over five million, by conservative efforts. And if we are truthful, we must conclude that the Palestinian refugees will not be granted their right under international law to return to their homes.

Unfortunately, many observers inside and outside Israel believe Mr. Netanyahu sent a clear and true signal on election day – i.e., there will be no Palestinian State under his premiership, if ever. And although Mr. Netanyahu tried to “walk back” the meaning of his election day remarks in the days following the election, that particular piece of information is now symmetrical for all parties to the transaction, eclipsing, as it were, any future possibility of moral hazard or adverse selection.

Four unresolved issue categories remain. Under the 1993 Oslo Agreement, the remaining issues are referred to as final status issues to be resolved on a separate track from other more resolvable differences, and include the status of Jerusalem, settlements, borders and refugees. Settlements and borders issues have been somewhat overcome by events. New settlements have expanded practically up to the eastern border, such that the new eastern boundary for Israel, containing all new settlement action is, in effect, the border with Jordan.

Resolving the status of Jerusalem and of refugees in a now inevitable one-state outcome which the Israeli government, though its own actions, has irrevocably designed and chosen, will depend in large part on whether Israel itself decides that its future will be as a liberal democracy, or as a repressive, apartheid state.

© Raymond Maxwell and raymmax.wordpress.com, 2013-2023. Unauthorized use and/or duplication of this material without express and written permission from this site’s author and/or owner is strictly prohibited. Excerpts and links may be used, provided that full and clear credit is given to Raymond Maxwell and raymmax.wordpress.com with appropriate and specific direction to the original content.

Repurpose and Repackage Your Life

Uncovering the People that Comprise the System

See what War is like and how it affects our Warriors

an attempt to touch heart, soul and mind...

I write about the things that matter to me. All opinions are my own. Public domain.

Philosophical reflections on life, death, and the meaning of life

The Library is Open...